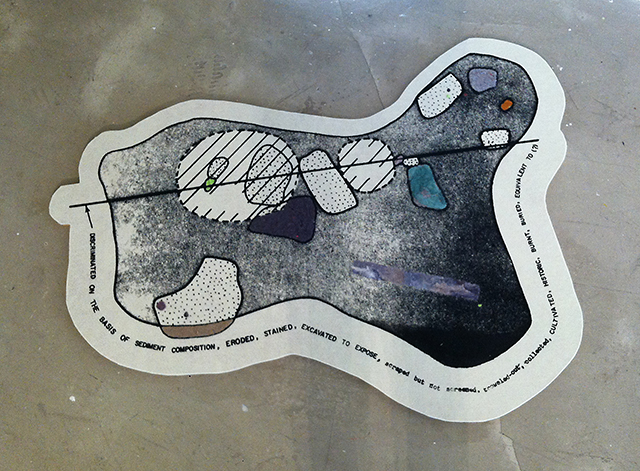 Excerpts from a Residual Atlas is an ongoing installation project in conjunction with the publication series Sediment | Sentiment. The work was presented as part of the exhibition Tracing Affinities, curated by Raven Munsell and Catalina Accosta-Carrizosa.

Excerpts from a Residual Atlas: Cross Sections
Screen-print on felt, flocked with dryer lint, mounted on MDF. Prints range from 6″ – 5′ in diameter and from 2″ – 6″ in elevation.

Below is a close up from one of the prints to show the materiality of the lint-flocking. 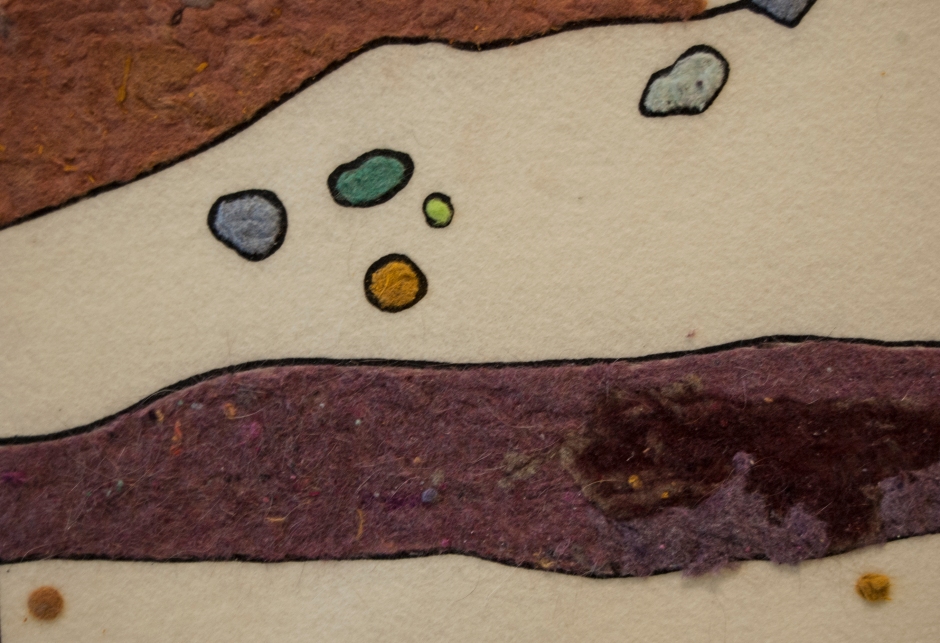 The installation extends the trajectory of the following publication series:

Sediment | Sentiment is a series of publications made between 2010 – 2013 exploring the idea of sediment as a metaphor to refer to the parts of ourselves we leave behind on a daily basis: physically, verbally, and emotionally. Source imagery and typography for the books comes from an archeological study titled Woodland Period Occupations of the Napoleon Hollow Site in The Lower Illinois Valley by Michael D. Wiant that was withdrawn from the Chicago Public Library in 2010.

Sediment | Sentiment: Collector’s Edition is both a comprehensive collection of the publications and a kit to encourage other types of collecting. Alongside the publications are homespun tools for performing your own domestic, small-scale archaeological digs: miniature funnel and strainer for flotation analysis; bags, slides and test tubes for collecting a range of materials; and chisel, brush, and multi-functional tweezer-shovel for the real dirty (or dusty) work. The case itself acts as a traveling toolbox and a set of two collection trays for use in the field.

Upon finding Woodland Period Occupations of the Napoleon Hollow Site in The Lower Illinois Valley I was struck by the intricacy and stylization of the many charts, maps, graphs, and illustrations that filled an otherwise objective text. Arriving from a realm of family folklore and genealogy as forms of personal archaeology, I began to remove the text and insert myself between lines and graphs.

All text that appears in Sediment | Sentiment issues No.1 – 5 was arranged cut-and-paste style (often letter by letter) from the text of the original archaeological study. With the exception of No. 3, all issues were screen printed on ivory felt and hand flocked with dryer lint collected from myself and over 30 individuals over the span of three years.